For Joffrey Artists Dylan Gutierrez and Xavier Nuñéz, it didn't take much to put plans into action. The idea was perhaps unclear in the beginning, but the vision was there: People had stories, and stories needed telling. The only thing left to do was join forces.

In a year that took artists away from the stage, Action Lines, the Chicago-based production company founded by Gutierrez, Nuñéz, and their creative partner Eric Grant, brings the creative trio's passions, interests, and general enthusiasm for the wider world of performance to the small screen. Not so much for the purpose of reinvention as much as texture, a jolt of creativity that puts the best of dance front and center. Take Interim Avoidance, for example, the larger-than-life installation now on display at 150 Media Stream, an abstract homage to the euphoria of live performance.

With its first commercial project in full swing, Action Lines is poised for more. Gutierrez and Nuñéz sat down to chat about the new installation and what's in store for the future.

What was the inspiration for this piece?

DYLAN The media wall was the inspiration. We thought we could do something where the dancers exist in this remedial state, kind of like the arts right now during the pandemic. We fleshed out this idea of the dancers appearing on this wall and they don't know why they’re there. The red light appears, and suddenly they understand they’re about to perform.

When I was younger, I remember seeing these beautiful images of professional dancers on a jumbotron moving in super slow motion at Lincoln Center. The person that I remember most was Herman Cornejo. He had these very pointed feet and beautiful turns. It was like watching superheroes. We agreed that there was something there.

How did you come up with the title?

DYLAN We have no space to perform right now. It’s a void in our lives, so we decided to make this little play on words. The ‘interim’ was meant to express a moment that’s happening for a short time, but that we will eventually get back to what we love. Ultimately, the title is meant to be hopeful.

What are your thoughts about film as a medium for artists?

XAVI Even before COVID, we thought film had this immense power to transform ballet. Especially during quarantine, it was one of the only ways that dancers and artists had a means to show their work. It has the power to change this art form and push ballet specifically, which historically has been an art form that hasn't changed for centuries. It's giving us the opportunity to reach new audiences in a fresh way that’s current with the times.

DYLAN When you're making dance films, what’s interesting is the film is front and center. You want to make something cinematic and fresh and fun to watch with dance as the support mechanism. There’s a synergy between filmmaking and dance that makes for unique storytelling. 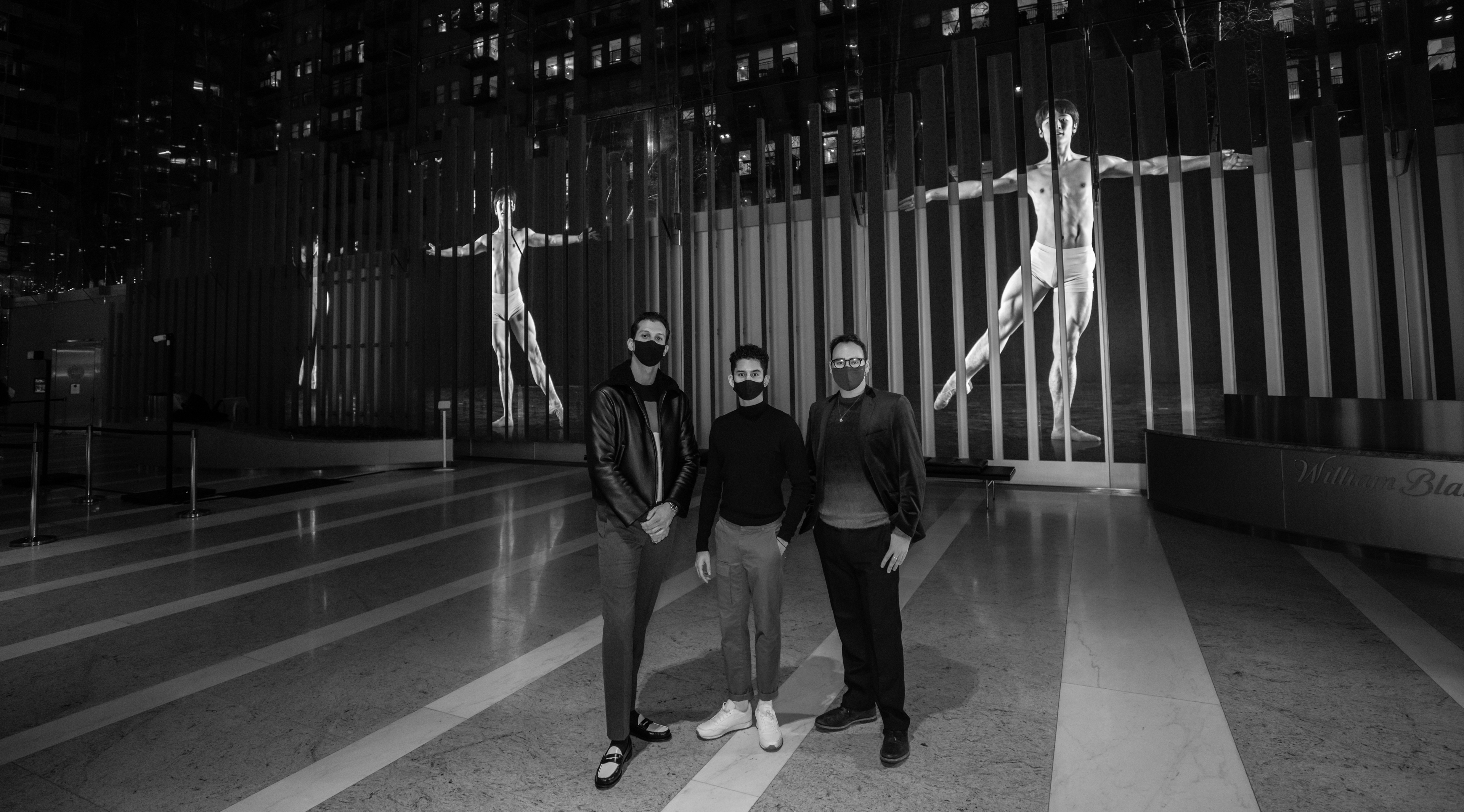 This is the first commissioned project for Action Lines. What was it like working together as a team for the first time?

XAVI I think we felt pressure to do well for everyone. Logistically it was difficult because we couldn't film people together. We had to think creatively about how to make it work for the installation. As dancers, normally we just rehearse and we're following the directions of a choreographer or rehearsal director—it’s all getting done for us. For Interim Avoidance, we were the ones setting everything up—pre-production, shoot day, post-production.

DYLAN I liked that we had control over the full creative aspect of it. Sometimes as a dancer, you're usually there to interpret someone else's vision. As great as that is, it can also feel limiting. It was nice to feel responsible for the dancers, getting their input and making them feel comfortable, executing the timeline. Even with those initial doubts, we felt confident that the process would be smooth.

XAVI It was also good having a team to piece it together. If any of us had tried doing this alone it would have been exhausting and probably frustrating. For example, I would be editing and looking at footage for hours and weeks. It all started to blur at some point. Then Eric would chime in and point out something that I hadn’t seen. His note instantly changed things for the better.

How do you guys work together?

XAVI Our relationship is definitely evolving. Our jobs always change throughout projects. We bounce ideas off of each other most of the time. As of now, I feel like Dylan is very much our main producer and advocate, doing a great job speaking on our behalf and pushing our vision. Eric is definitely our glue. He’s super organized and keeps everything together and he’s also great as an assistant director.

DYLAN We all enjoy each other. We all like to share responsibilities, but we also have our strengths. Xavi is definitely a creator. Eric is a logistical wizard. I like to talk to people and make connections. We’re also not shy about sharing input and giving honest feedback. That’s probably one of the best things about the process, our ability to share whatever is on our minds.

Take us to the moment when you decided you were going to form a production company. How did it come about?

XAVI It started a year ago. Eric and I were doing videos nonchalantly. We had this idea to do one thing with Dylan and [Dylan’s fiancé] Jeraldine. Then the pandemic hit, and we stopped. Dyl sent me a text and was like, Let's make [this production company] happen. Eric and I had been talking about doing something similar. At that point, it was about joining forces.

DYLAN We set up a meeting to talk through it. It felt like now or never. COVID really changed things. We talked about our goals and about communicating with each other, how we saw ourselves working with one another. You could sense that it was going to be a great fit. I think a week later I was meeting with Yuge [Zhou, curator of 150 Media Stream] and we had the opportunity for Interim Avoidance.

What’s next for Action Lines?

DYLAN Don't want to divulge too much information just yet. Xavi?

XAVI We’re doing prep work for other projects. We’re hoping we can lock them in so that we can share the information with our colleagues. We can say they’ll definitely be happening in Chicago!