For Edson Barbosa, We’re All in This Together

Edson Barbosa is one of four winners of the Joffrey Academy's 2022 Winning Works Choreographic Competition. His world premiere, On the Same Boat, debuts March 18–20 at the Museum of Contemporary Art Chicago’s Edlis Neeson Theater.

On a sunny afternoon in February, a group of young dancers released their grips and sprung from a tender embrace. The movements that followed were determined but soft, graceful yet commanding. The same could be said about their creator, Edson Barbosa, a Company Artist with the Joffrey since 2014 and now a 2022 Winning Works Choreographer—the first Joffrey Artist to receive the honor in the 12-year history of the competition.

Barbosa is well known among the Joffrey faithful. His million-dollar smile and captivating stage presence has earned him wide accolades among  audiences and critics alike. It was especially evident during a lightning-quick performance in 2019 of Justin Peck’s The Times Are Racing, a “sneaker ballet” in which Barbosa’s exceptional range in ballet, tap, and jazz was on full display.

As a child, Barbosa took to dance almost immediately, describing himself as a "cosmic dancer" even before birth. But now, the stage is calling for more, this time as the creator of a world premiere performance, set to debut March 18-20 at the Museum of Contemporary Art Chicago. In a recent conversation, Barbosa discussed his new piece, On the Same Boat, and where choreography might lead him next.

What it was like when you found out you were a Winning Works choreographer?

It was rewarding. I had been working on an idea for a long time. To finally have the courage to put that plan into the world, it felt like the right time. It was a mix of—not fear but something close to it. I was surprised because I didn’t think I would get it.

Have you always wanted to choreograph?

My first piece of choreography, I was probably ten. There was a creative festival for my school every October. The students would have to make solos and duets. I ended up doing like nine pieces. It was crazy for a child. I forgot the steps to the solo I created, so I improvised. I choreographed at the San Francisco Ballet School—three pieces with the trainees. We did some performances for donors. When I got to Joffrey, I still had the choreographer side of me. That's probably why I was able to choreograph all the steps in a week because it was something that I've been building and figuring it out.

You’re coming at this from a unique perspective because you're a Company Artist of the Joffrey. You’re also the first company member to choreograph for Winning Works. Did you feel more comfortable working with the Studio Company and Academy Trainees?

I was home with the people at Joffrey. [Former Joffrey Artist] Raul [Casasola] is my rehearsal director. [Joffrey Company Pianist] Jorge [Ivars] is playing the piano. It was a homecoming after eight years in the company. It felt like I was doing the right thing with the right people at the right moment. 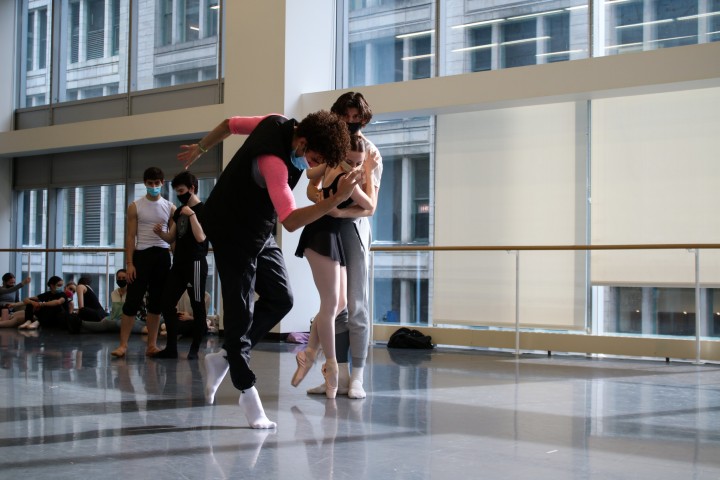 Can you tell us about your piece?

The title is On the Same Boat. It’s about life, people, relationships. When I was quarantining during the pandemic, it felt like I had nothing to do but overanalyze my relationships. I started thinking about my friends and wondering if they felt like I did. I noticed that the idea of relationships is the same thing. Everybody goes through the same process. My parents have broken up like eight times.  Relationships in my life have been very eventful. I've been working on why people fight and what they’re fighting for.

How would you describe your movement style and choreographic process?

I can close my eyes, listen to the music and it pops to me. I don’t see movement right away. First, I see the structure, like hitting the accents. But my inspiration comes from the music. If I'm listening to hip hop, I'm going to dance hip hop. Whatever the music is doing informs how I move.

Has anything surprised you in the studio? Is there something challenging that you didn't expect?

Usually things are slower than what my mind is telling me. In my mind I see positions, but something that takes eight counts is usually two in my mind. Having to adapt and bring it to life takes time. That's what the job is—making it work. I get stuck when my vision is not fitting with the steps. You just have to keep trying and repeating. Repetition is rehearsal’s best friend.

What’s it been like choreographing during a pandemic in such unique conditions?

Luckily it wasn't like last year. COVID just breaks the momentum. You have to stop and start. But COVID also gave me time to think. Before, life was on the go. Now I'm analyzing everything, even my relationships.

Do you see yourself choreographing in the future beyond your performance career?

I can see myself at the front of the room. I love rehearsing. Maybe one day I could be a rehearsal director. But when I'm inspired, I could really go for choreography. We'll see what life brings.

Winning Works is meant to give artists of color an opportunity to showcase their work. As an artist of color, what does that mean to you?

It means that every person deserves an opportunity. This is a perfect platform for young choreographers to have a platform and launch their work. Joffrey has been a pioneer. It's a great time to be doing this, especially.

What do you hope the audience takes away from your piece?

I hope they can relate. I hope they can cry. That's the best feeling—when people acknowledge that it’s real. I've been that person. I'm touching a couple hot topics—domestic abuse, cheating, being strong enough to forgive and move on. Maybe people are experiencing the same thing and can relate. Maybe it can help them solve something. I just hope it means something to people when they watch it. That's what the artist wants the audience to feel.