It was the winter of 2019 and the Joffrey’s Ashley Wheater MBE was filtering through unread emails. One stood out among the others, a cryptic subject line on behalf of the British Consulate in Chicago. Wheater opened it.

“Congratulations,” the letter began, “you are the newest Member of the Order of the British Empire.”

Wheater’s long and storied career, which began at the Royal Ballet in his home country Great Britain, had come full circle—from his student days in London to his illustrious performance career, and finally, to his leadership as The Mary B. Galvin Artistic Director of The Joffrey Ballet here in Chicago.

Earlier this winter, Wheater traveled back to the U.K. to receive one of Britain’s most coveted awards and take part in his official investiture ceremony.

A Brief History of the Royal Honours

The Royal Honours tradition dates to 1876, under the reign of Queen Victoria. It was then known as the Royal Victorian Order and established to recognize extraordinary personal service to the monarch, members of the monarch’s family, or a viceroy or senior representative of the monarch.

In 1917, King George V, grandfather of Queen Elizabeth II, developed a new order of chivalry called the Order of the British Empire to recognize men and women who were making extraordinary contributions to the war effort during World War I.

Today, the Order of the British Empire awards celebrate people across a variety of vocations and professions, including science, philanthropy, and the arts. The most recognizable Royal Honours are MBEs and OBEs, just two of many titles that are awarded during a royal investiture.

A Royal Honour and the type of honour an individual receives is determined by a special committee. The committee’s decision then goes to the British Prime Minister, then finally The Queen for approval. Royal Honours are doled out twice a year, once in the annual New Year’s Honours List and again on The Queen’s official birthday.

What is an MBE? 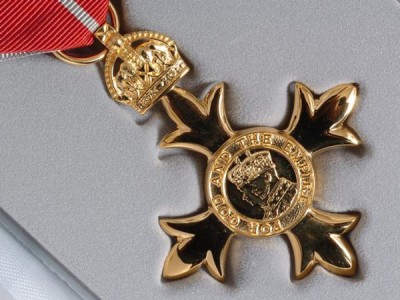 What is a Royal Investiture?

An investiture is the official ceremony when honourees receive their award in person from The Queen or a Member of the Royal Family.

According to the Royal Family, around 30 Investitures take place each year, either in the Ballroom at Buckingham Palace, or in the Waterloo Chamber at Windsor Castle. Investitures occasionally happen at the Palace of Holyroodhouse in Edinburgh, or overseas during State or Royal visits.

Wheater’s investiture in December took place at Windsor Castle and was presided by His Royal Highness Prince Charles of Wales.